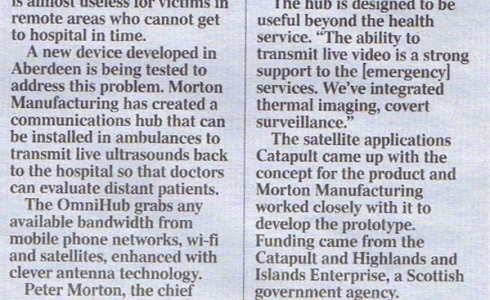 Tactical Wireless features in The Times

A life-saving signal when seconds count

A life-saving drug for stroke victims can be effective if given up to four and a half hours after the onset of symptoms. As such, it is almost useless for victims in remote areas who cannot get to hospital in time. A new device developed in Aberdeen is being tested to address this problem. Morton Manufacturing has created a communications hub that can be installed in ambulances to transmit live ultrasounds back to the hospital so that doctors can evaluate distant patients.

Peter Morton, the chief executive, says: “In an area where a mobile phone doesn’t work, we can use multiple signals to transmit live-feed ultrasound images.” He says that this kind of service will be necessary even as 4G becomes available across more of the country. The company is not yet working with maternity services, although it has been mooted. Mr Morton says: “You can envisage situations where community nurses, midwives, would have this support. All of this is to reduce demand on heavily stretched healthcare units.” The OMNI-HUB® is designed to be useful beyond the health service. “The ability to transmit live video is a strong support to the [emergency] services. We’ve integrated thermal imaging, covert surveillance.”

The satellite applications Catapult came up with the concept for the product and Morton Manufacturing worked closely with it to develop the prototype. Funding came from the Catapult and Highlands and Islands Enterprise, a Scottish government agency. He is keen to repay the support of HIE by building a factory in Scotland by the end of this year, with a view to generating at least 55 jobs within three years.

He sees the United States as a key market, including agencies such as homeland security. Tactical Wireless, his subsidiary, has trials set up in the US in the autumn and he expects to be selling his product there this year. 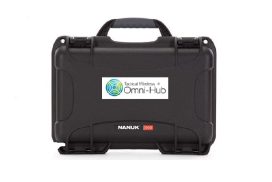 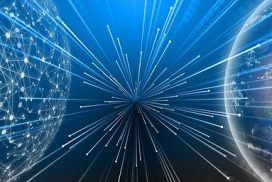 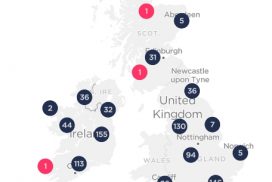 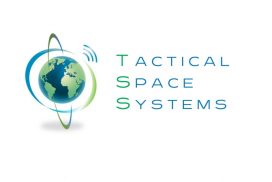 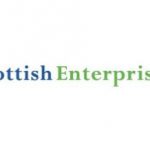 It’s essential that a stroke victim is properly assessed, as you can’t give the clot-busting drug to people who’ve had a bleed in the brain. 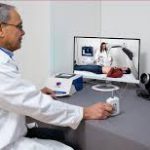